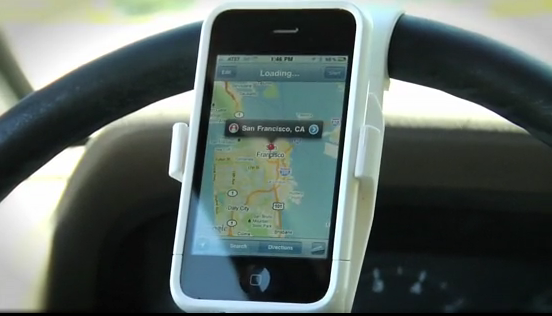 Have you ever wanted a convenient way to access your iPhone while in your vehicle? While there’s no shortage of automobile accessories for Apple’s smartphone, none of the ones currently available seem to put your device in a place where it’s easily accessible.

I’m not talking about for texting and driving, but a car stand would be nice for things like answering phone calls or listening to music. Kickstarter project founder Sameer Desai hopes to capitalize on where others have missed the boat with his new product, the Steer Safe…

The Steer Safe accessory holds your iPhone for you while you drive. And it doesn’t sit on your air vent or stick out of your cup holder, it hangs from your steering wheel so it’s always within reach. The holster can tilt in all directions, and can even sit in landscape mode.

The cool thing about Steer Safe is that it fits every vehicle and several smartphone models. It’s made to sit at the top of your steering wheel, so it’s as visible as your speedometer is while driving, this could be both a good and bad thing.

For starters, having your cell phone directly in front of you would keep you from taking your eyes off the road to find your handset to make or receive a phone call. Also, having such quick access to your device would come in handy for changing music tracks. 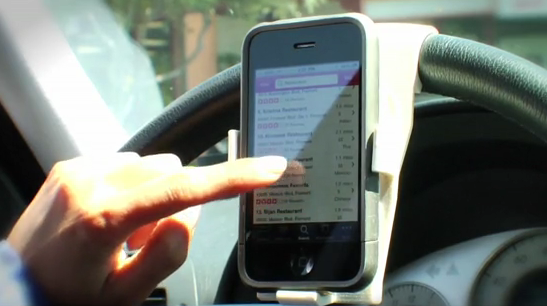 On the other hand, the Steer Safe could entice users to operate their phones more frequently while they’re driving. I know I’d be much more inclined to use a device that’s propped up in front of me, rather than one that is in a cup holder or in the passenger’s seat.

The Steer Safe project has about 30 days left to raise $20,000, and as of this writing they’ve collect just under $3,000. Pledging $25 or more will get you one of these bad boys if they are make it to the production line. For more details, head on over to the official Kickstarter page.

What do you think? Good idea? Bad idea?