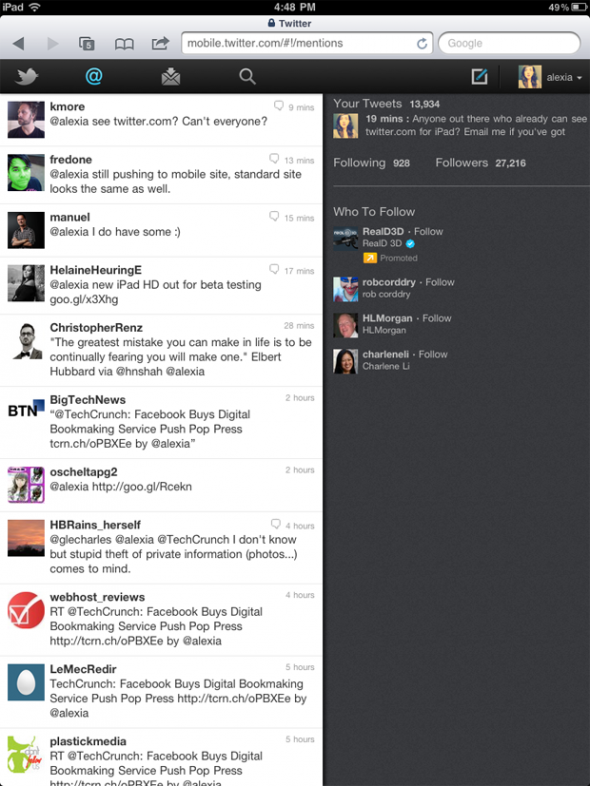 Folks who prefer browsing Twitter.com with the iPad instead of using a native Twitter client will be happy to hear that the social networking giant is updating the site to be more compatible with Apple’s tablet.

Up until now, navigating Twitter’s website from the iPad was unpleasant. You had the choice to view the site in desktop mode, or an upscaled mobile view — neither one is very tablet-friendly. But that’s all going to change during the next 7 days…

According to the company’s twittermobile account, a new HTML5 version of Twitter.com for the iPad went live yesterday. The new design will be rolling out to iPad users over the next week, so you may not see the change right away.

“The HTML5 app provides a great option for people who prefer to use the browser over native apps. it’s two-color view is consistent with the Twitter experience you’re used to (on Twitter.com), and it takes advantage of touch gestures and other device capabilities.”

It seems there has been a big push recently to make sites more compatible with tablet browsers. Google just updated their site with a new interface for the iPad, and Facebook is expected to launch their big HTML5-based Project Spartan in the near future.

Have you received the Twitter.com update for the iPad? Do you like it?