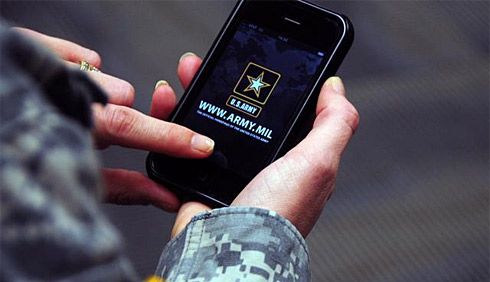 While their weapons technology is state of the art (we hope), the US Army’s smartphones seem to be outdated. A recent report by CNN claims that the Army is looking into doing some upgrading by making smartphones a requisite part of field gear.

Earlier this year, we saw the US government ditch their aging cell phones in favor of iOS devices, and now it appears it’s the military’s turn to go 2.0…

“The Army is wrapping up a six-week program to test the viability of using touchscreen phones and tablets in combat. The pilot program began on June 6 within the White Sands and Fort Bliss training areas in New Mexico and Texas.”

The trial involved over 300 smartphones including the iPhone, and several Android and Windows Phone 7 devices. Tablets sporting iOS and Android operating systems were also evaluated. So what were the results?

Program shepherd Ed Mazzanti stated that both the iPhone and Android models were very well received. The Army expects to adapt both platforms so as not to fall susceptible to cyberattacks targeted at a specific operating system.

Interestingly enough, Army software engineers have developed an efficient way to port applications between the two platforms- so there’s minimal fragmentation. It’s funny how that kind of innovation is absent in the consumer market.

The test program has proved so encouraging that Army officials expect the first wave of smartphone-equipped soldiers could be shipped overseas later this year. The devices will feature apps specializing in communication, information and location.

Given the young age of most new Army recruits, it’s not surprising that the troops are so comfortable with the devices. I’m just wondering how far this tech will go. “Need to launch a missile? There’s an app for that.”

What do you think of the military using iPhones?