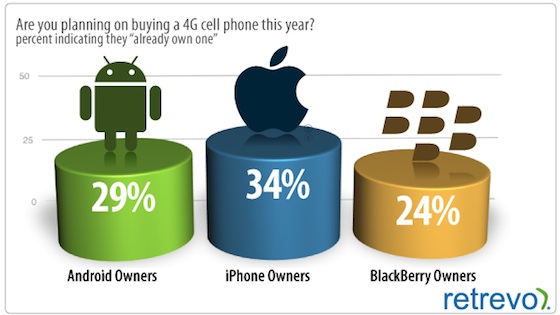 “Will the next iPhone be 4G capable?” It’s a popular question in the ongoing next-gen iPhone debate. Some folks believe that Apple wouldn’t sacrifice reliability or design by going with currently available 4G chipsets, and others think it’s a necessity for the device to sell.

However, a recent survey by marketing research firm Retrevo suggests that consumers aren’t too concerned about 4G compatibility. In fact, 34% of the iPhone users questioned believed their device was already 4G…

MacRumors highlights the Retrevo survey, which seems to conclude that the ever-changing definition of the term 4G has confused consumers.

“Confusing the issue is the fact that the marketing term “4G” is now being used to apply to not only the Long Term Evolution (LTE) technology being rolled out by Verizon and other carriers but also HSPA+ networks such as those run by AT&T and T-Mobile.”

On top of that, every carrier’s 4G network offers different network speeds with a variety of variables. That’s a lot of information for the average consumer (not someone who reads iDB everyday) to digest.

In all reality, the iPhone coming this fall is not expected to be 4G-capable. The currently available LTE chipsets are too bulky to fit in the iPhone’s slim casing, and the technology doesn’t have the maturity or the availability you’d expect from an Apple product.

And while some folks in the tech industry think that omitting the new broadband technology from the next iPhone will seriously affect sales, it’s obvious (by more than this survey) that most consumers don’t care about the played-out marketing buzz term.