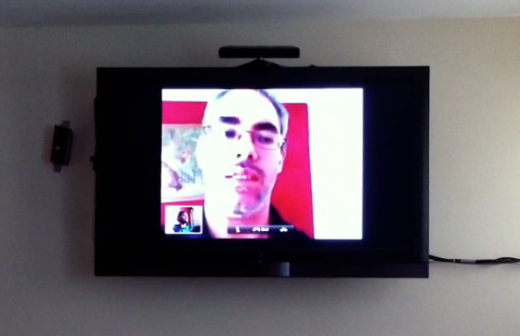 Apple has come up with some remarkable technology over the last few years, AirPlay and FaceTime to name a few. AirPlay allows users to sling media from their iDevices to the big screen via an Apple TV, and FaceTime enables one-tap video calling.

What would happen if you combined the two technologies? According to TiPb, you would get a unique video chatting experience that can be shared by everyone in the room. Meet the latest iOS 5 feature to surface, FaceTime via AirPlay mirroring…

Remember back in early June when we told you about the new AirPlay-iPad 2 mirroring feature? It allows you to mirror anything from your Apple tablet to your TV, including media content and video games.

Well Rene Ritchie of TiPb has discovered something in the new iOS 5 beta released Monday, namely that this mirroring feature is now available during FaceTime calls.

“Whether it’s grandpa and grandma, or the team in England, it takes FaceTime from a small, personal experience to a big, group experience at the touch of a button.”

Not all features in iOS betas make the final product (see iOS 4.3’s gestures), but I think it’d serve Apple well to see this one through. Who else can claim 1-tap video conferencing on your TV? Now just give me some new hardware with FaceTime HD, and I’ll be on my way.

What do you think of FaceTime mirroring? Will it be a hit?