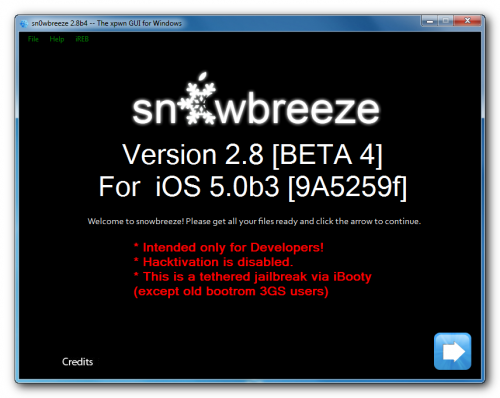 Apple released iOS 5 Beta 3 yesterday, and it was quickly confirmed that you could jailbreak Apple’s newest beta build with last month’s version of the popular jailbreaking tool, RedSn0w. A

This problem has now been fixed in the updated version of the Windows jailbreak tool, Sn0wBreeze, and the Dev Team has also updated RedSn0w with the same fix. Happy jailbreaking!

Sn0wBreeze creator, iH8Sn0w, recently announced Sn0wBreeze v2.8b4 for iOS 5 Beta 3, and the tethered jailbreak will correct the problem with malfunctioning App Store apps that was found in the previous version of RedSn0w.

Remember, Sn0wBreeze is a Windows-only tool, and iOS 5 Beta 3 is intended for developer use only. You can download the newest version of Sn0wBreeze from our downloads section. Follow our tutorial to see how to jailbreak with the tool.

As you can tell, the iPad 2 is not supported in either of these jailbreak tools, and JailbreakMe will only jailbreak the iPad 2 on iOS 4.3.3. Don’t install an iOS 5 beta on your iPad 2 expecting to jailbreak.

Let us know how the updated versions of SnowBreeze and RedSn0w work for you when jailbreaking iOS 5 Beta 3.