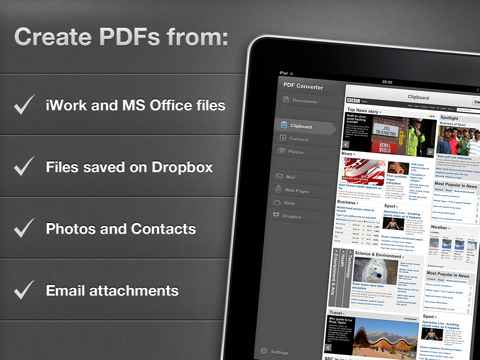 Wouldn’t it be nice to be able to take an existing Pages or Numbers document and convert it into a PDF right on our iPad, making it readable on just about any device you could possibly want to send it to?

Unfortunately, though, the iPad doesn’t currently support the ability to print to a PDF- a feature we half-expected Apple to add alongside the bungled release of AirPrint.

As an aside, does anyone actually use AirPrint? If you do, we’d love to hear why and when you make use of this little known and rarely used feature, in the comments!

Now, back on subject…

With an eye on fixing our particular plight, Readdle has released PDF Converter, which, as you might guess, converts existing documents into good ol’ PDFs. It doesn’t get much simpler than that!

“PDF Converter lets you transform any file you have on the iPad into a PDF document whenever you need it. Everything from a multi-million contract to a web page you want to read later can be saved as a PDF in several taps.

The process is 100% secure since conversion is done locally on the iPad. Your documents never leave it and it does not require internet connection.

Once installed, PDF Converter appears in the “Open In…” list on your device. This lets you save a PDF any document from Mail, Dropbox, MobileMe iDisk, ReaddleDocs and many other applications on your iPad that supports this function.” 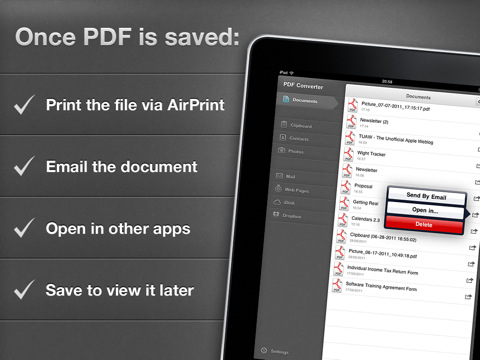 PDF Converter works with all the usual document types, with Pages, Numbers and Office files all included in the list.