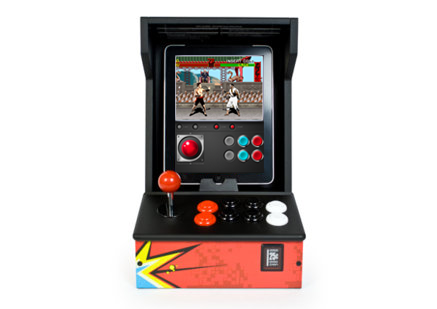 Remember when we told you about the iCade? The retro iPad accessory lets you play select iOS games via a set of arcade-style controls, and its SDK just became available for 3rd party development. It looks like the jailbreak community struck first.

Engadget is reporting that the popular Cydia app known as iMAME4All was just updated to support the new tablet accessory. iMAME4All is an emulator that plays hundreds of retro titles, so needless to say it would be an awesome fit for the iCade…

If you’re not familiar with MAME, it stands for Multiple Arcade Machine Emulator. The iMAME4All app plays any MAME-compitable ROM on your iOS device. Apparently it’s a popular format, as there are over 2,000 supported MAME titles available.

iCade-compatibilty is offered in iMAME4All version 1.7, which has not made its way to Cydia, yet. However, iCade owners that are anxious to try out the software can download the .deb file from the developer’s website. If you need a refresher on installing .deb files, be sure to check out our tutorial.

Now that you can jailbreak the iPad 2, iMAME4All should run smoother than ever before. Combine that with the arcade controls of the iCade, and you might just forget that it’s not 1985 anymore.

Do you use iMAME4All? Have you tried it with an iCade yet?