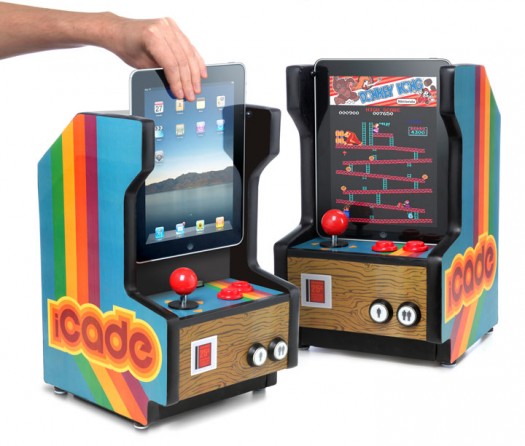 Here at iDB, we are huge fans of homegrown, iDevice-related products. We’ve featured all kinds of crazy inventions from an invisible instrument to a remote control helicopter.

Unlike the aforementioned products, the iCADE wasn’t a Kickstarter project. In fact, it originally started out on ThinkGeek’s website as an April Fool’s prank. Well, obviously the iCADE materialized and the $99 accessory just opened up it’s doors for 3rd party development…

If you’re still wondering what an iCADE is, it’s essentially a miniaturized-arcade-machine turned iPad accessory. The device houses your iPad and enables you to play games on it via the built-in bluetooth control pad.

Originally, the iCADE only worked with games found in the Atari Greatest Hits app. Now that all developers have open access to iCADE’s SDK (Software Development Kit), hopefully we’ll start to see compatibility added to other popular iOS titles.

Can you imagine playing Street Fighter or Sonic the Hedgehog on the iCADE? Talk about nostalgia. I don’t consider myself a frequent gamer, but I have to admit this is pretty cool. I would definitely consider buying one if more iOS games were compatible.