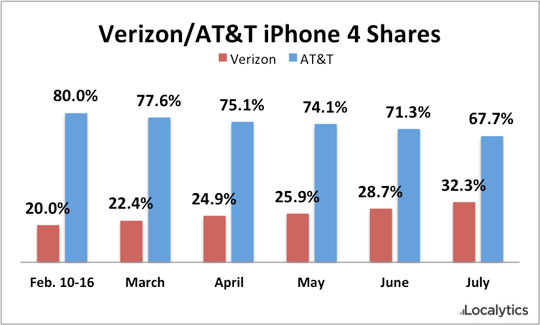 Way back before Apple deemed Verizon customers worthy of the iPhone, pundits and users alike suggested that bringing Apple’s much-loved handset to another US carrier could see an explosion in sales. The rationale was that many Verizon customers did indeed want an iPhone, but were not willing to suffer AT&T in order to get one.

Since its release earlier this year, Apple has seen its Verizon handsets shift in huge quantities, and according to a new study, iPhones bought for Verizon’s network now account for 32% of all US iPhone 4 handsets….

The study, carried out by Localytics, shows that in the month of July, 32% of iPhone 4 market share is owned by the newcomers, with AT&T’s 8 month head-start giving them the remainder 68%.

“Despite AT&T’s nearly eight-month head start, Verizon has managed to capture nearly a third of the US iPhone 4 market. Mobile app analytics firm Localytics broke down all US iPhone 4 traffic to come up with the figure, as well as charting the Verizon iPhone’s growth since its launch in February.”

The trend of Verizon’s market share increasing is also met with AT&T’s numbers showing a decrease.

Localytics believe Verizon’s edge may not simply come from a perceived coverage and service quality edge, but also the company’s unlimited data plans – the same plans that have just come to an end.

“Why the recent uptick in Verizon adoption? One reason may be Verizon’s unlimited data plan, which they are scheduled to do away with on July 7th. AT&T officially discontinued its unlimited data plan in mid-2010, although existing customers were allowed to keep their plan as long as they remained AT&T customers. We’ll continue tracking the shift in iPhone 4 market share to see if Verizon loses momentum post-unlimited-data.”

Time will tell whether the rush to sign up for iPhones with Verizon will be tempered by more limited data plans, but we can’t help but think the main selling point of Big Red is that it isn’t its other competitor – AT&T.

If you’re a US-based iPhone user we’d love to hear which carrier you use, and more importantly, why?