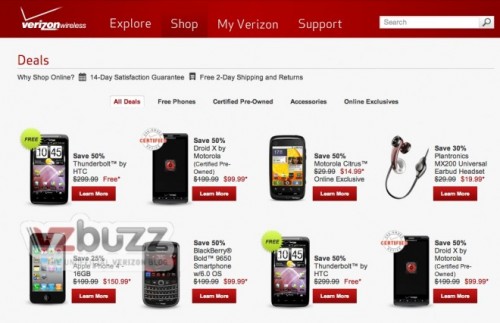 Apple didn’t surprise too many people when they didn’t announce a new version of their popular smartphone last month. We’ve known since March that Apple wasn’t planning on unveiling any new hardware at their WWDC conference.

A majority of the rumor mill points to an early fall release for the next iPhone, and we have a few reasons to believe that’s accurate. It’s been reported that Apple has already dropped supply orders in anticipation for the new model, now we’re getting word of an iPhone 4 price-drop…

A sign of a product refresh usually means a price drop of the current version. Take cars for example. A 2011 model’s price would drop once a 2012 model becomes available, because why would anyone pay the same amount of money for an older car?

VZBuzz, also known as the Unofficial Verizon Blog, reported yesterday that the iPhone 4 might see a $50 price drop in the near future. The site posted the above picture as well, which seems to be a screenshot of Verizon’s website offering the iPhone 4 16GB model for $150.99.

The ad also depicts several Android devices on sale, but that’s about as common as a belly button. Apple on the other hand, rarely allows carriers to discount its products unless they’re refurbished or out of date (see 3GS).

Whether the discounted price has to do with the impending next-gen launch or not remains to be seen. But if you’re on Big Red’s network and have been thinking about getting the iPhone 4, it might be worth waiting a month or two.

Anyone looking to snag an iPhone 4 at this price?