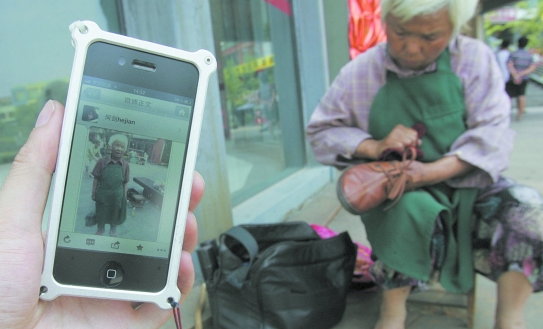 We’ve reported on a lot of unfortunate events here on iDB. From the ongoing struggle in Foxconn’s factories, to human rights, to the awful tragedy that struck Japan earlier this year. So needless to say we love it when a feel-good story comes along.

Just a few days after hearing the heartwarming story of Holly and her iPad, another touching tale involving an iDevice has started to circle the web. The Loop uncovered this report from a Chinese publication about how an iPhone sparked a reunion between a mother and daughter…

Zhingshu Fang is a shoe cleaner in a small Chinese province. She hadn’t seen or heard from her daughter in over 5 years until a recent run-in with a stranger and her smartphone.

Fang was hard at work one day when she noticed a woman nearby with an iPad. She had heard that the internet might be a good place to start looking for her daughter, so she politely asked the stranger for help.

As it turns out, the iPad the woman was carrying was a Wi-Fi-only model and there wasn’t a hotspot within miles. But touched by the woman’s story, the stranger snapped a photo of Fang using her iPhone and posted it to Weibo (a chinese version of Twitter).

Over 100,000 people forwarded the photo and description of Zhingshu Fang, until it eventually reached the missing daughter. Needless to say, this led to a reunion between the two family members, who have vowed never to lose each other again.

Sappiness aside, it’s nice to see people using a social networking site for good instead of evil. I feel that services like Twitter should be used more often to aide in finding missing persons.