Just before Apple’s big iOS 5 reveal at WWDC a few weeks ago, rumors began circulating that Apple was planning to integrate Twitter right into the system. At the time we didn’t know whether the rumors were true or not, let alone how deeply integrated it would eventually turn out to be.

When Steve Jobs and his band of merry men took to the stage at WWDC, we finally saw what Apple had in store for us, but despite iOS 5 largely hitting the spot we couldn’t help but feel let down by the fabled Twitter integration, at least in its current form…

See, as things stand in iOS 5 beta 2, Twitter integration only really stretches so far as to allow the tweeting of images and web links. While we were all hoping for something a little more substantial, we were satisfied that Apple had at least taken the first tentative steps toward making iOS a more connected experience and hoped more functionality would come as the betas progressed.

After spending some time with both betas of iOS and getting our hands dirty, we’ve discovered a little more Twitter integration than Apple has shown off to date – our testing shows two new features:

So, what exactly are we talking about? If you’re using an iDevice with iOS 5 installed, feel free to play along here.

Now, when you open your new test account you’ll find the new field sat waiting to be played with. Tap it and you’ll be faced with two new options. Tweet does exactly what you’d expect it to – the now familiar Twitter overlay pops up, already populated with the chosen username. Obviously, deleting that username means you can then use your full 140 characters as you wish. No attached images, no links. If that sounds familiar, it’s because we speculated this may be possible when an Apple employee was seen tweeting ‘from iOS’ in such a manner. 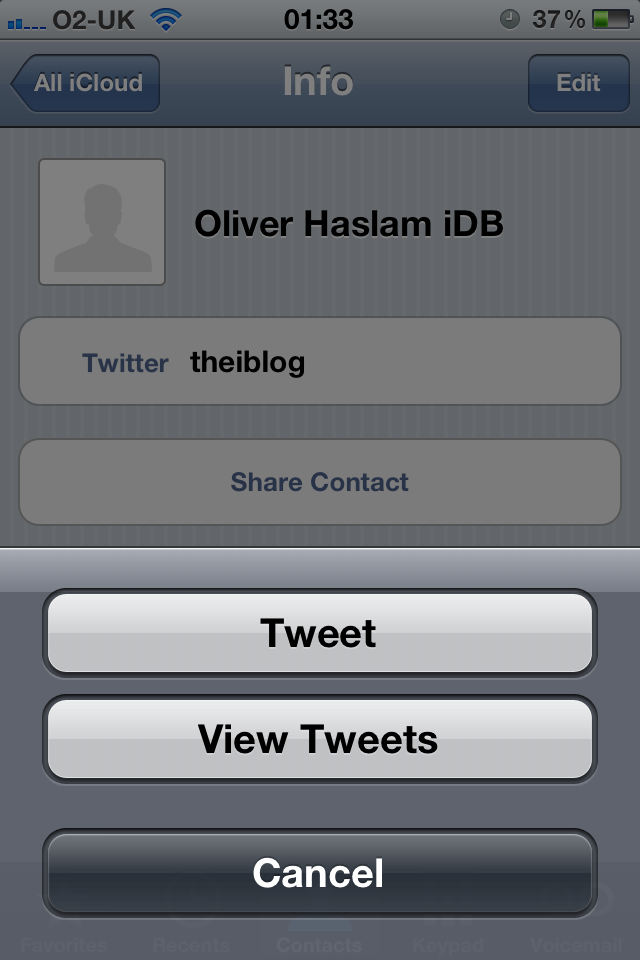 If you go back slightly you’ll remember the ‘View Tweets’ option when you tapped the Twitter username. Stabbing at this will launch that profile inside the official Twitter app. Useful? Youbetcha!

So there we have it. Clearly Apple has bigger plans for Twitter integration into its iOS platform than it was letting on at WWDC, and we can’t wait to see what they have in store!