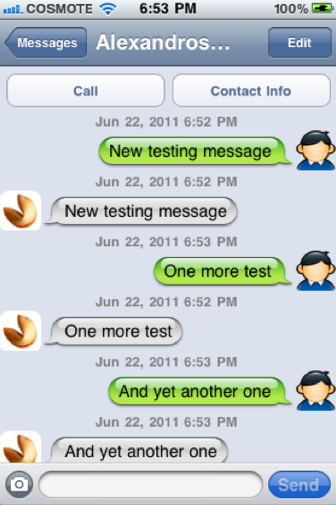 The stock Messages app in iOS is so boring. Everything is the same color and font, and there’s no option for contact photos or custom avatars. Sure there are utilities in Cydia that allow you to skin the SMS app, but they tend to make your phone feel sluggish.

If you’ want to spruce up your Messages app, without dealing with Winterboard or themes, you may want to check out SMSEnhancer. This new jailbreak tweak adds contact photos and time stamps to your otherwise dull conversation screen…

I’d have to agree with Josh Tucker from ModMyi, who described SMSEnhancer as a cross between Cyntact and MarkThatMessage.  This utility combines the features of both tweaks into one convenient little package.

When the Timestamp feature is enabled, every incoming and outgoing message is timestamped. When the Picture feature is turned on, SMSEnhancer automatically embeds a contact’s photo from your Contacts app. If there isn’t one, a default picture is used.

SMSEnhancer uses the stock Messages app, so it doesn’t add an icon to your spring board. It does, however, add a panel to your Settings app that allows you to turn the features on and off, as well as change the default photos.

I can’t really explain why, but I like the look of contact photos in the Messages app. I’m surprised Apple hasn’t integrated this into iOS yet. At any rate, if you want to try SMSEnhancer, it’s available in Cydia at just under a buck.

Have you tried SMSEnhancer yet? What’s your favorite SMS tweak?