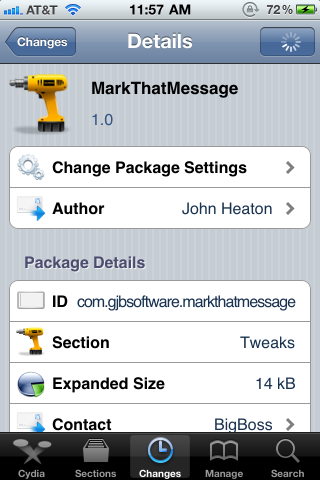 I’ve always loved the way text messaging worked on the iPhone, and that love was increased with the advent of the jailbreak app BiteSMS. That app added just enough customization to the mix to make SMS messaging a truly enjoyable experience on the iPhone.

Of course, there are also plenty of tweaks available for SMS messaging as well, some better than others. MarkThatMessage is one such tweak that falls into the others category. Is it really necessary to know the exact time that I sent every single SMS message?

That’s not to say that MarkThatMessage is a bad tweak in itself, because it’s not, it does indeed work as advertised. The problem with this tweak is that it clutters your SMS inbox, and throws off the minimalism that makes stock iPhone apps so nice to begin with. 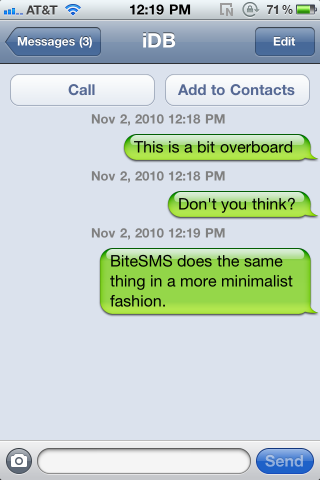 MarkThatMessage is a textbook example of what information overload is. Let’s be honest, no one really needs to know every single time a text message was sent, although I’m sure the FBI wouldn’t mind the world doing so. The point is, this tweak puts too much info on you screen at once.

After installing this tweak I came to appreciate Apple’s method for time stamping messages all the more. And if I do happen to need to know the exact time a specific SMS was sent and received, BiteSMS has that functionality built in. All you do is tap and hold on a specific message, and the timestamp fades into view. This is the preferred method for implementing such functionality. 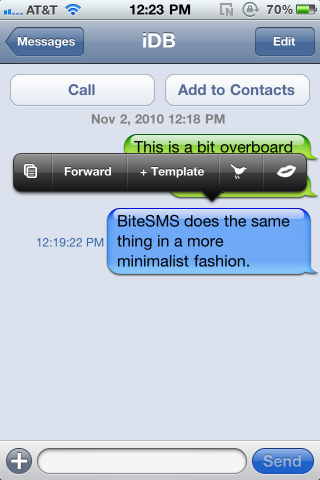 At $0.99, MarkThatMessage won’t cost you much, but at this point that money would be better off helping with the purchase of an $8.99 BiteSMS license. Not only will you get timestamp functionality, you’ll reap quite a few additional features that makes SMS messaging a much more pleasant affair.

Whatever route you decide to go, remember that both MarkThatMessage and BiteSMS are only available on the Cydia store. That means that your iPhone must be jailbroken.

What do you think about Apple’s stock SMS time stamping capabilities? Is MarkThatMessage something you’ve been longing for? Let us know in the comments.