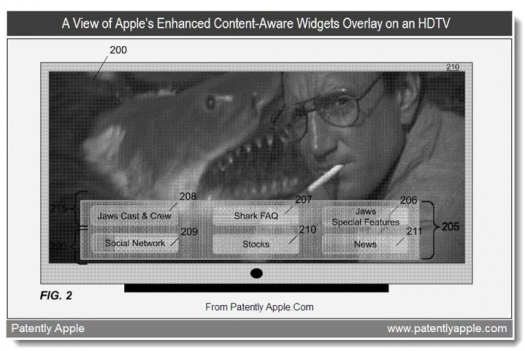 It seems like the Daily Tech report that we covered a few days ago has sparked quite a flurry of Apple TV speculation. Though no one can agree on exactly when we’ll see a TV set from the Cupertino company, most folks concur it’s in the works.

One must wonder though, what could Apple be cooking up for their first entry into the TV market? Patently Apple just discovered this filing from Cupertino company, that may just give us some insight on that very question…

Apple’s patent outlines an Enhanced TV Widget Service, which is a solution to the problem Apple sees with current offerings from other companies. They believe these “widgets” are limited because they are unaware of the media content that is currently being displayed on the TV set.

Apple proposes a new widget system that allows users to access content, based on the show they are watching. This could mean actor background information, supplemental media content and even interactive voting.

“Apple’s paradigm involves taking widgets to the next level of live widgets that will interact with TV shows like NBC’s “The Voice” so that users could directly vote for their favorite candidates from their HDTV effortlessly. The system will also work with live sports like football with other live content is in the works.”

And that’s just live TV. The new widget system could be used for other types of programming as well. Imagine watching a cooking show and using AirPrint to print a featured recipe. Or catching the end of your favorite sitcom and being redirected to iTunes to download the episode.

Though there are several products out there that describe themselves as “Smart TV’s,” none of them seem to measure up. Even Sony’s TV line with integrated Google TV doesn’t seem to have scratched the surface of possibilities.

Could Apple revolutionize the TV set?