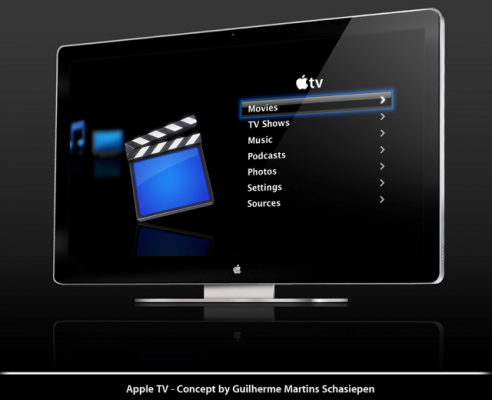 Though the Apple TV2 is doing much better than its predecessor, ATV2 sales are anything but spectacular compared to Apple’s other products. The device has been labeled by Apple as “just a hobby,” but there is new evidence suggesting that the Cupertino company may be starting to get serious about taking over our living rooms.

Daily Tech is reporting that they have heard on good authority that Apple is looking to replace the Apple TV line this fall with an entirely new product. Their source, a former Apple executive, is claiming that soon we will be able to walk into an Apple store, and walk out with a TV set…

Rumors of an Apple-flavored television have been flying for years. But if you’ve ever heard the expression “strike while the iron’s hot,” you might understand why an Apple TV set is more probable now than ever before.

The product is said to be iOS-based, with its hardware made from an OEM, possibly Samsung. The new TV set will combine FrontRow, iTunes, AirPlay and other features into a slender, sexy package.

Though it’s not like Apple to jump into such a saturated market, maybe the company feels like they have enough to offer customers to take the gamble, which is an interesting dynamic in itself. How would Steve Jobs and company build a TV set? I guess we’ll just have to wait and see.

Do you think we’ll see an Apple TV set? What are some features you’d like it to have?