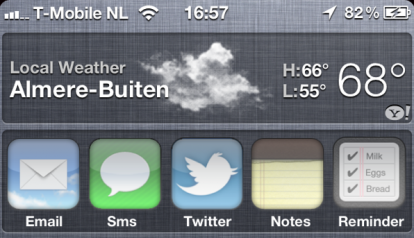 Apple’s new firmware won’t be officially available for another few months, but that hasn’t stopped the jailbreak community from experimenting with the beta release. We’ve seen several iOS 5 Notification Center widgets over the last few weeks, but there’s always room for more.

The latest jailbreak tweak to surface for the new iOS is called QuickComposer. The widget allows you to access the composition screen of different applications with a single tap…

iPhoneItalia explains that QuickComposer stores 5 icons in the iOS Notification Center that open up to their respective apps. Email, SMS, Twitter, Notes and Reminder all get shortcuts in this innovative widget.

I like the idea of quick access to apps like Reminder and Email, but I don’t ever use the Notes app. Hopefully by the time this widget is ready to go there will be support for other applications like BiteSMS and Evernote.

iPhoneItalia has QuickComposer slated to release shortly after iOS 5 officially launches. Some developers haven’t been too keen on releasing anything iOS 5-related until the NDA is lifted when the final version is made available to the public this fall.

What do you think of QuickComposer?