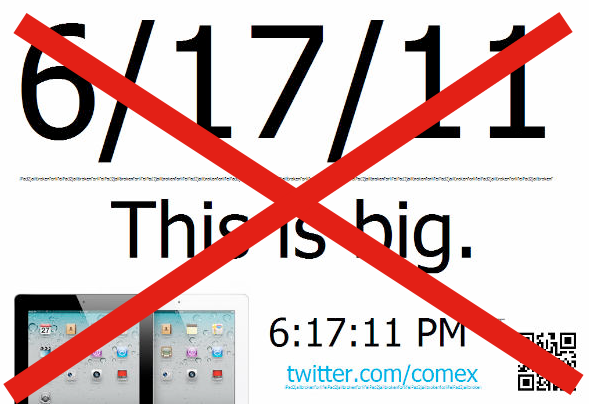 We apologize if you got excited about the return of JailbreakMe today. A rumor got started this morning that claimed Comex was releasing his iPad 2 jailbreak through JailbreakMe.com this afternoon.

As it turns out, the teaser image (reportedly from Comex’s Twitter account) that started this rumor has been proved fake, and we’re back to the drawing board in terms of an iPad 2 jailbreak ETA. 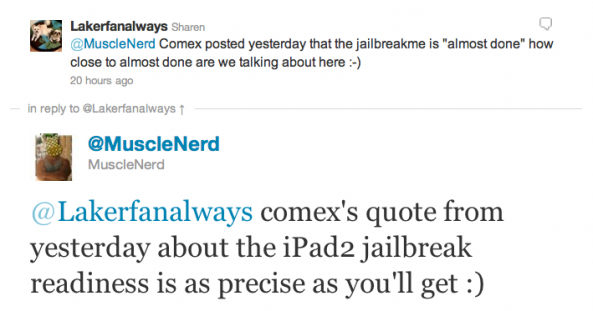 As you can see by the above tweet from Dev Team frontman MuscleNerd, Comex wasn’t planning on giving a more exact timeframe for his jailbreak. MuscleNerd also stated that followers of Comex that subscribe to SMS updates would have received the link to this image as well.

The renowned hacker already said that his jailbreak is “almost ready,” and that’s all we have to go on.

In regards to the iFans forum posting that started this whole mess, an iFans moderater got in contact with us and shared this information:

“I’m a moderator over at iFans, where this was originally posted, and I just wanted to confirm that this is not a true story. This user joined the site purely to post this image in the hopes of spreading misleading information. MuscleNerd actually came onto our site and more-than-less confirmed that this wasn’t something Comex posted. If anyone follows Comex via SMS, they’d have received a link to this Tweet even if it was “deleted.” It’s fake.”

The user account that posted (and assumedly made) the teaser image that started this rumor has been banned from the iFans forum.

We’re sad that this news is fake, but we’re still holding out hope for an iPad 2 jailbreak coming very soon. Member of the Chronic Dev Team, P0sixninja, has assured the community that the iPad 2 jailbreak is being “diligently” worked on as we speak.

At iDB we do our best to report the news and not this fake stuff, but sometimes we make mistakes. The truth is that there’s no exact ETA for the iPad 2 jailbreak, and we’re sorry for the confusion.