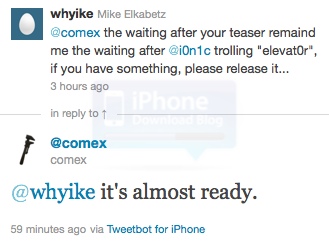 Last week we broke the news about a teaser Comex had released on the JailbreakMe website, which consisted in a cryptic image suggesting that he might have found a new exploit. At the time, we speculated that it could be related to an iPad 2 jailbreak.

iDB reader j0n sent us a tip about a tweet Comex sent a few minutes ago in reply to someone asking about his teaser:

You might ask yourself why Comex would release a jailbreak when iOS 5 is right around the corner. I see 2 potential reasons why.

First, it might be a jailbreak that is hardware-related, which means iOS 5 would not be able to patch the jailbreak. Second potential reason, and the one I find the more plausible, is that iOS 5 might have patched whatever exploit Comex found, so there is no reason for him to hold it back at this time.

Only time will tell, but it seems that a userland jailbreak for the iPad 2 is right around the corner. Can you say “Sunday is Funday?”