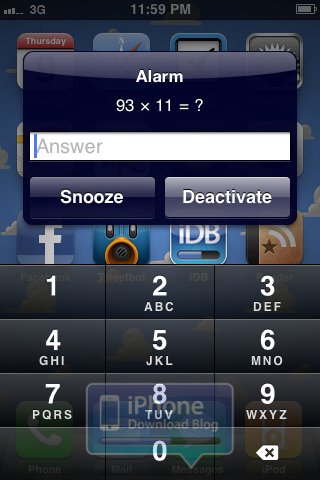 We’ve all been there: You’ve had a late night, but you still have to get up early in the morning. You set your iPhone’s alarm for the usual time to get up and go to work, and you’re greeted by your alarm in the early hours of the morning. You’ve got the option to snooze the alarm or turn it off. Which option do you choose?

MathAlarm is a new jailbreak tweak, by Ryan Petrich, that makes sure you’re actually awake in the morning. You have to solve a simple math equation before you can hit the Snooze or Deactivate button.

This tweak is pretty genius if you’re not that much of a morning person. What better way to make sure you’re actually awake than by giving you a math problem?

Personally, I’m so bad at math that MathAlarm would probably drive me insane instead of helping me wake up. Combine that with not being a morning person, and you probably won’t want MathAlarm.

However, I’m sure there are plenty of people that will appreciate a tweak like this.

What do you think about MathAlarm? Useful for you?