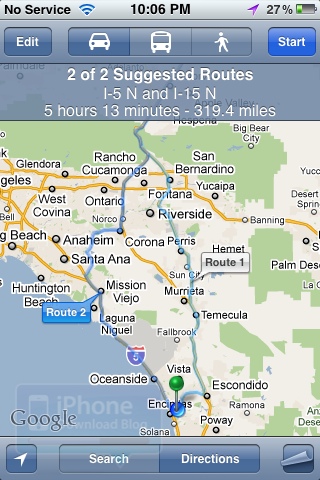 If you go to the Google Maps website and look for directions to a specific location, chances are there are different ways to get there. This is what Google calls “suggested routes.” The website lets you easily see those alternate routes and you can select the one that fits you best.

“Suggested Routes” is a new feature in the Maps app of iOS 5. Just like Google Maps on the web, the app will offer you suggested routes if available…

As you can see on the screenshot above, the Maps app found 2 ways for me to go to Vegas. I can switch between the 2 by tapping “Route 1” or “Route 2.” The distance and estimated travel time changes accordingly.

This is a feature that was long overdue. Now I just wish I was able to drag certain points on the map to change the route myself, should I want to take a detour, just like you can on the web version of Google Maps. But hey, I can’t complain, this is a neat new feature.