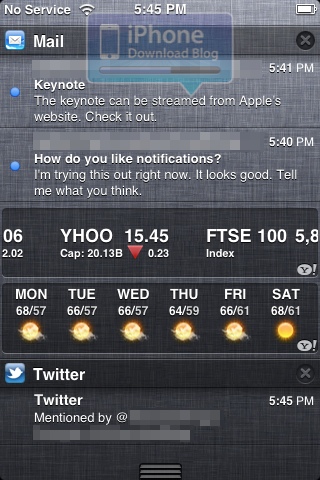 We’ve been receiving a few screenshots of the new iOS 5 from a secret admirer, and things look yummy on Apple’s new operating system for mobile devices. After leaking to us images of the initial iOS 5/iCloud set up, the improved photo app, a bunch of other screenies, we now get a closer look at notifications.

Apple got clearly inspired by the jailbreak community on that one. I guess hiring Peter Hajas is their way to say thank you?

Thanks for sending this in. If you have more, you know where to send them.