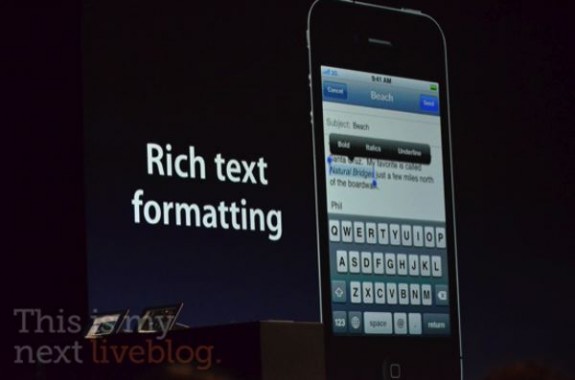 The new features keep pouring in as Scott Forestall, the man behind iOS, announces update after update in the new iDevice software. While we knew that a new notifications system and other revamps were coming, not much was said about the iOS Mail app.

There wasn’t really anything wrong with the previous version of the iOS Mail app, but it did leave a couple of things to be desired. Apple must’ve gotten wind of jailbreak tweaks like Rich Text for Mail, because they just included it and other features in iOS 5…

The revamped Mail application in the new iOS allows you to give your emails a little flavor by making text bold, italic, or even underlined. The updated app also allows you to indent paragraphs and flag messages.

There is also a system-wide dictionary built-in to iOS 5 that is accessible in the Mail application. If you don’t know what a word means or if you are using it correctly, simply hold down on it like you normally would to select it. Instant definition.

Apple hasn’t forgotten about enterprise users either. For folks who need that extra layer of security, the iOS Mail application now supports encrypted email. If someone sends you an encrypted email, you must have their certificate to few the message.

Although it’s nice to see features like rich text formatting becoming native in iOS 5, it seems to prove once again the power of the jailbreak community. After all, apps like Backgrounder and Cycorder made multitasking and video recording possible before Apple ever implemented them.