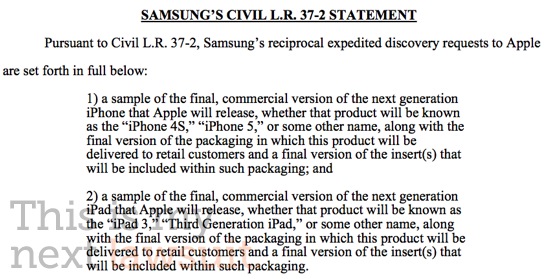 Samsung has filed a motion to Apple requesting to see the iPhone 5 and iPad 3. According to This is My Next, Samsung’s lawyers want to get their hands on the iPhone 4S/5 and iPad 3 to see if Apple’s future products are similar to Samsung’s future devices, like the Droid Charge and Galaxy Tab 10.1.

Apple and Samsung have already been at each other’s throats in the courtroom over claims of playing ‘copycat’ in product design. Apple sued Samsung for copying the “look and feel” of the iPhone and iPad, and now Samsung says that “fundamental fairness” requires Apple to turn over its upcoming devices for product comparison…

Nilay Patel of This is My Next,

“It’s ballsy, but it’s not totally out of the blue: the move comes just a few days after the judge ordered Samsung to hand over pre-production samples of the Droid Charge, Infuse 4G, Galaxy S II, and Galaxy Tab 10.1 and 8.9 so Apple could determine if those products should also be part of the lawsuit and potentially file a motion to block them from the market.

Now, the key difference between the two requests is that Samsung had already announced its products, while Apple has maintained its traditional iron silence about future devices.”

So, this move from Samsung doesn’t totally come out of the blue. Apple did request the same thing from Samsung to see if the company’s products fell under the ongoing look-and-feel lawsuit that Apple has going with Samsung. As Nilay points out, there is a difference between Apple’s request and Samsung’s.

Apple keeps a tight lid on future products, where as Samsung already had plenty of review and test units out in the wild at the time of Apple’s request.

Nilay Patel continued to outline some of the basic facts about Samsung’s motion to see Apple’s unreleased products. Here are some highlights:

It’s unclear as to how this motion will be settled between Apple and Samsung’s lawyers, but you can bet that Apple will never actually give Samsung any unreleased models of anything. The very thought of Apple doing that goes against everything the company has stood for since Steve Jobs took back control of the company in 2000.

Samsung clearly wants whatever leverage they can get against Apple in this ongoing lawsuit, but this motion really means nothing if Apple appeals (and that will happen). By the time any conclusion is actually made, the next generation iPhone (and possibly iPad) will already be on the market.

Samsung has to be kidding itself if it thinks for one second that Apple would even consider handing over an unreleased product for comparison with other handsets. I can only imagine that Steve Jobs had to chuckle when he got sent a copy of this motion from Apple’s legal team. Good try, Samsung.

What do you think? Will we actually see any unreleased Apple products come out of this motion? Anything that would happen would be behind closed doors, so don’t hold your breath.