Twitter just announced on its blog that it has officially acquired TweetDeck. On top of that, Twitter has promised to maintain the TweetDeck that “users know and love.”

When it was revealed that Twitter was purchasing TweetDeck for nearly $50 million, TweetDeck users got a little nervous. Would a Twitter buyout mean that the TweetDeck faithful would be left out in the cold? Twitter has assured that it has no plans to fundamentally change the popular third party client that so many people rely on…

“Today, we’re pleased to announce that the TweetDeck team has joined Twitter.

This acquisition is an important step forward for us. TweetDeck provides brands, publishers, marketers and others with a powerful platform to track all the real-time conversations they care about. In order to support this important constituency, we will continue to invest in the TweetDeck that users know and love.

TweetDeck is a great example of a third-party developer that designed tools for the incredibly important audience of Twitter power-users and, in turn, created value for the network as a whole.”

TweetDeck has been an incredibly successful Twitter app for both the desktop and iPhone. The iPhone app has been around for a long time, and has always been considered a client for the Twitter “power users” out there who want more control and management over their Twitter experience. 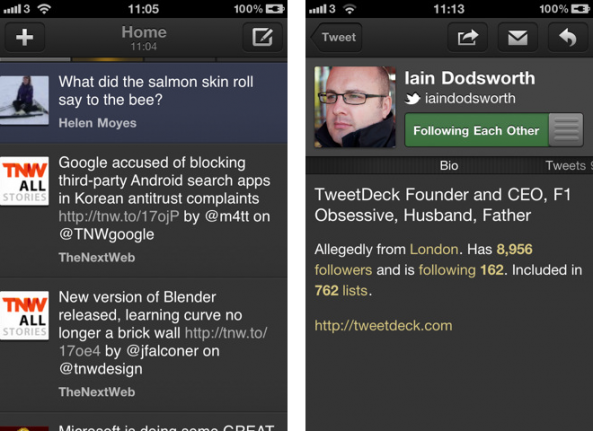 If you enjoy TweetDeck on your iPhone, keep enjoying it. It shouldn’t be changing anytime soon.

Are you glad that Twitter isn’t going to change TweetDeck? Or could you care less?