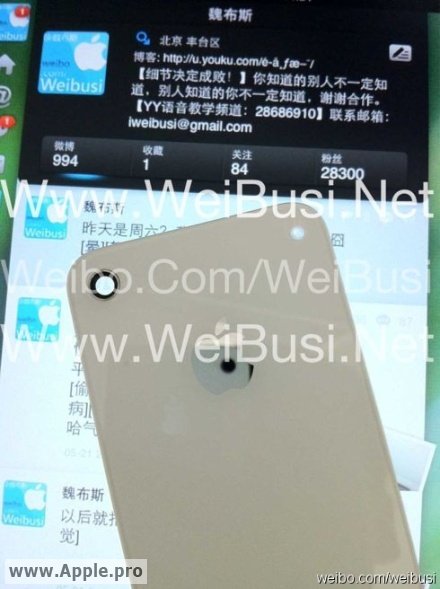 It looks like we have another snapshot of an iPhone 5 component circling the web. These leaked photographs of next-generation iPhone parts have become very popular lately.

I guess it makes sense though. With so much evidence pointing to a September launch, it’s logical that manufacturing companies just recently started receiving designs for the new device and are gearing up to start production…

Apple.Pro posted this photo on their website, claiming that it is the back cover of the iPhone 5. The purposed casing is white, with 2 separate openings in the back. A familiar hole for the camera lens and a second for presumably a flash.

The blog mentions that he can’t confirm the photograph’s authenticity, but the design is very similar to a mysterious iPhone 5 case we reported on last week. That case has since been removed by the vendor of the website.

The separated flash design is interesting to me. Though it would almost certainly make for much better low light photos, something about the 2nd opening makes the design look sort of clumsy and very un-Apple-like.

Throw this one in the maybe pile. We obviously won’t know anything for certain until Jobs himself hoists the device up in the air at a media event. Apple could easily be handing out false designs to help combat the leaks from the overseas suppliers. Stay tuned.

Are you hoping Apple’s next iPhone has a separated flash?