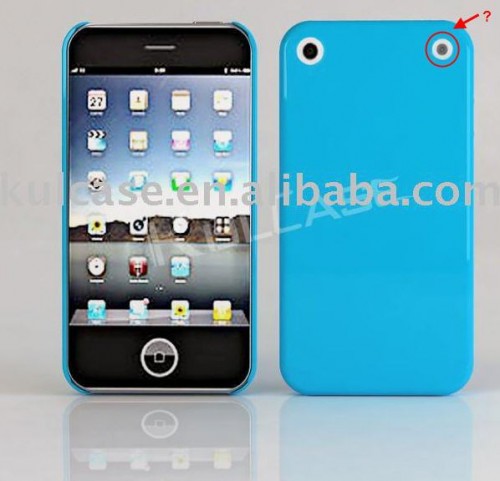 Next-generation iPhone rumors are like cute girls on an elevator; there’s always room for one more. With little known about Apple’s next smartphone, all we have to go on is the gossip.

The latest tidbit comes from GadgetsDNA, who have come across an “iPhone 5G” case on an online retailer’s website. Kulcase LTD makes cases for smartphones and apparently they can predict the future…

Either that or they’ve seen a prototype of the next iPhone, because they’ve already made a case for the unannounced device. The purported iPhone 5G case is similar to the current design but has a mysterious 2nd opening, opposite of the backside camera.

The blog speculates that this 2nd hole could be for a newly designed flash system, or a micro projector. It could even be a 2nd lens needed for 3D capture. The photo of the case includes a mock-up of the next iPhone itself.

The graphic depicts the new iPhone as having a larger screen with an almost non-existent bezel. This coincides with previous rumors that suggested the iPhone screen would get bigger, without making the device any larger.

Obviously rumors like this need to be taken with a grain of salt, but this photo was worth mentioning. Overseas case manufactures have been notorious for paying big bucks to any information regarding the design of new Apple products, in order to be first to market.

However, Apple is also notorious for leaking multiple prototypes to stop such leaks, so right now your guess is as good as mine. Hopefully we’ll get some official word on the next iPhone at Apple’s developers conference in a few weeks.

Could this be the next iPhone design? What do you think the mysterious 2nd opening is for?