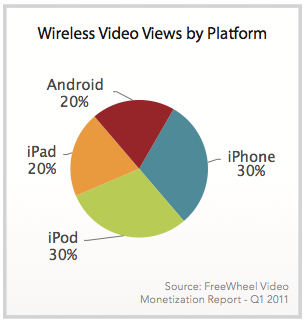 You can sell all the devices you want and flood the market with your platform, but if people don’t use those devices, you’re not really proving anything. Yes, you got it, this little piece of news I’m about to share with you falls under the “take that, Android” category.

According to a recent report by video monetization startup FreeWheel, 80% of videos viewed on a mobile device are watched from either an iPhone, and iPod Touch, or an iPad…

The iPhone and iPod Touch lead the way with 30% each of mobile video views, followed by the iPad with 20%. Android devices, all of them combined, made about 20% while the rest of other platforms accounted for barely 1%.

In comparison to wired video viewing, consumers viewing video on their mobile devices is small and is currently driven by Apple devices, which make up 80% of all video views between iPhones, iPod Touches and the iPad. This majority reflects the number of these devices in market and their early dominance in the smart- device sector. (Their user base has had these types of devices longest and tends to use them as much for media consumption as for communication, per reports from comScore in 2010.)

It also reflects the development priorities of content producers and distributors: they optimized their content first for the Apple platforms, with Android a later priority.

Though there are fewer than 20 million iPads in the global market right now (Apple statistics for Q1 2011) and many more iPhones and iPods, iPads currently make up 20% of all wireless video views.

You can read the full report should you want to learn more.

Are these numbers surprising to you?