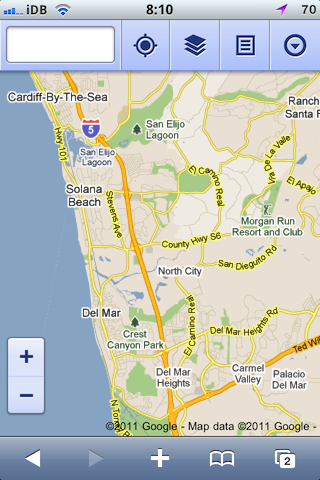 Google is now allowing you to use Google Maps directly from the browser, without having to use an application. Simply point your iPhone to maps.google.com and after allowing the web app to use your current location, Google Maps will locate you and offer various options that are already available through the native app.

The app works pretty well, although it took me a minute or so to really figure out how everything worked, especially how to get directions and switch back and forth with the maps. Maybe that’s just me though. It’s still early and my brain probably isn’t at 100%.

This being said, the conspiracy theorist in me thinks there is a reason why Google is releasing Google Maps for the browser at this time…

As we’ve seen in the past, Apple has been working on developing its own map app, first by buying out PlaceBase, a mapping company, but also by hiring map software developers. My guess is that Google knows very well that its days on iOS devices as a stock app are counted and is now making a push to the browser.

As long as I have my Google Maps app on the iPhone, I can’t see why I would use the web app for that.