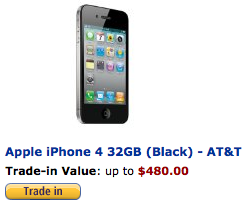 You have an old iPhone and don’t know what to do with it? Instead of selling it on Craigslist or eBay, you might want to consider trading it in at Amazon. The company’s new trade in program allows you to receive an Amazon gift card in exchange of your old iPhone, or any other device for that matter.

The process is pretty simple and straightforward too. Go to Amazon trade in page, select the device you want to trade in, print the label, ship it, and receive a gift card for the pre-determined amount…

You obviously get less than you would from selling your iPhone to a third party, but Amazon trade in program isn’t a bad deal either. For example, it will buy your old black 32GB iPhone 3GS for $242. Got an iPhone 4 to sell? You can get up to $480 for it. Not bad.

It’s interesting to see that AT&T iPhones get you more money than Verizon iPhones when traded in, which makes sense as a GSM iPhone can be used anywhere in the world, while a CDMA iPhone can only be used in fewer places.

Is that something you’d consider doing?