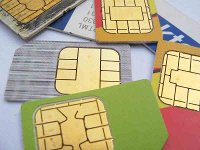 When Apple launched the first iPad a little over a year ago, it introduced a fairly new SIM format called Micro SIM. A few months later, those Micro SIMs were also implemented in the iPhone 4. Smaller in size compared to the standard Mini SIMs, Micro SIMs do the exact same job while using less space.

Always on the fore front of tech pioneering, Apple is now submitting a new requirement to the European Telecoms Standards Body (ETSB) for the use of even smaller SIM cards in cell phones and mobile devices…

The goal behind this is obviously to enable phone manufacturers, including Apple, to make devices that are even smaller and thinner.

This move goes against reports late last year that Apple was looking into dumping SIM cards and skipping the carriers by providing devices with a SIM integrated into the device. Because Apple raised anger in many carriers HQs, they probably gave up the idea of an integrated SIM for something that would make everyone happy.

As usual, time will tell but it does make sense for manufacturers to petition for smaller SIMs, doesn’t it?