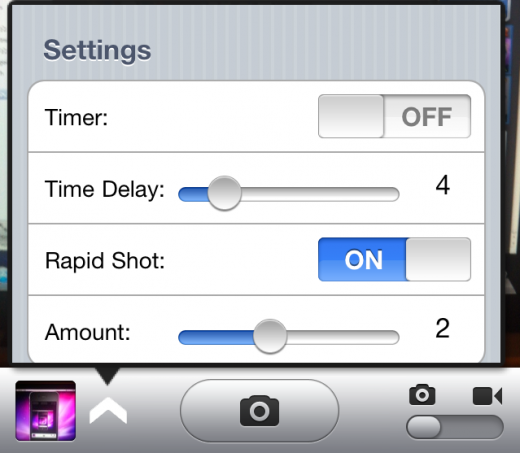 While the stock Camera.app in iOS lacks many basic functions, applications in the App Store and Cydia usually do a good job of filling in for the missing features.

There are apps that allow you to take panoramic photographs and there are even apps that will automatically stamp your pics with the time and date. Well, word on the street is that another tweak is on its way to Cydia, and it’s bringing some interesting photo-taking features to the stock Camera app…

ModMyi is reporting that PictureMe has been submitted to Cydia and should be available sometime soon. The iOS extension brings 2 much-needed features to the stock camera application, which previously weren’t available without accessing 3rd party software.

Rapid shot and timers are typical features for even the most bargain-priced digital cameras. Rapid shot allows you set your camera to quickly take several consecutive photos. This allows you to capture a close finish to a race or a dive into a swimming pool.

A timer on the other hand, allows you to set your camera to snap a photo within a given number of seconds. This feature is typically used when a camera is on a tripod, and the photographer would like to be in the photo.

As soon as PictureMe is released in Cydia, we’ll let you know. If you didn’t catch it in the video, the tweak will cost $1.99 and install into your native camera app.

Are you excited about PictureMe? Or do you use CameraPlus or some other 3rd party app with these features?