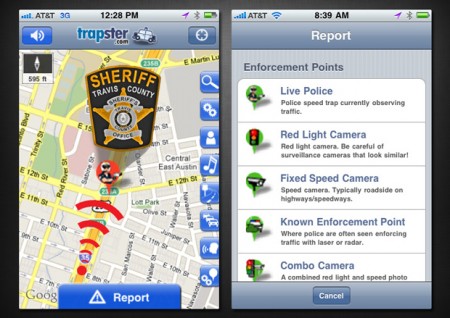 Yesterday, Apple testified in a U.S. Senate subcommittee hearing on mobile privacy. Senator Al Franken called the Senators, as well as both Apple and Google, to talk about mobile privacy in wake of the recent cell phone tracking panic.

While Apple was pressed hard by the panel on the recently exposed tracking file, they were also questioned on their App Store submission policy. Typically, the Cupertino company is criticized for their app entry policy being too strict, but not this time…

A few months ago, Sen. Charles Schumer and others wrote letters to Apple, Google, and RIM regarding the application Fuzz Alert. It and other apps like Trapster notify users of police check points and speed cameras, and the senators requested that they be removed.

Schumer was disappointed to see that both Apple and Google had yet to remove the questionable apps, especially after RIM reacted so quickly to pull the software. AppleInsider quoted the Sen. from yesterday’s hearing:

“I hope that you narrowly look at this app. You agree that it is a terrible thing, and it probably causes death.”

“The apps in question are publishing data that’s actually first published by the police department. We’re in the process of looking into it – we have a policy that we don’t allow apps that encourage illegal activity. If the app’s intent is to encourage people to break the law, then we’ll pull it.”

Sen. Schumer was unsatisfied with Apple’s explanation, commenting that he knew of no police department that would publish this kind of information in real time. He gave both Apple and Google a month to investigate the applications and get back to him.

Do you believe Apple should remove these DUI checkpoint applications? Do you think it encourages drunk or reckless driving?