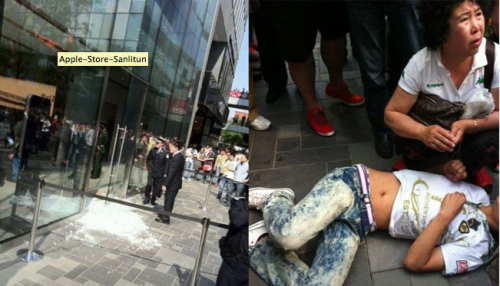 It’s been a few months since Apple launched their new tablet here in the states, but it’s popularity is still echoing around the globe. After the U.S. release, Apple has slowly pushed out the device to other countries.

The latest country to get hit with iPad 2 fever is China. While typical device launches are met with peaceful lines of Apple fans, the story of yesterday’s launch paints a grimmer picture.

The Wi-Fi iPad 2 launched in China on Friday at 8 a.m. AppleInsider reported that there were still lines at the flagship Apple store in Beijing, around 10 a.m., with numbers in the hundreds. Apple employees handled the crowd very well, allowing just a handful of customers in at a time.

The article explains that at some point during the morning, a near “riot” erupted after retail employees tried to close the store down following a scuffle between Apple staff and crowd members.

The details of the tussle are sketchy, since most of the information is being derived from translated Chinese news reports. But what we’ve been able to gather is that Apple store employees got into an altercation with tablet scalpers outside the Beijing store. These individuals were reportedly selling Apple’s new iPad for just a $30 markup over what the store was charging.

We’re not sure exactly what spawned the brawl, but there are several reports that 2 young men and 2 men were injured. The 4 involved are currently hospitalized. The Apple store was forced to close for some time, while they cleaned up the mess of broken glass (valued at $46,000.00). It’ll be interesting to see what, if anything, Apple has to say about the events.