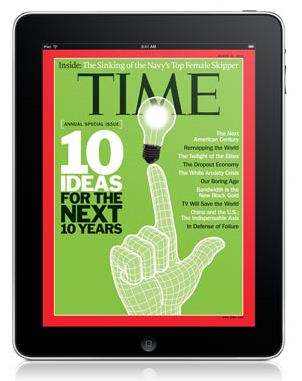 The iPad was expected to be a new medium for publishers in the print business to reach their customers, but so far it has yet to catch on. Disagreements between Apple and major publishers on digital subscription terms have seriously crippled the device’s potential.

The Cupertino company actually caused quite a stir in the magazine industry last February when they announced the conditions of their in app subscription policy.

Apple would reap 30% of the profits generated from in app subscriptions of an App Store application. They also required that publishers beat or match the prices of their subscriptions offered outside of the app.

Negativity aside, Apple achieved a breakthrough last month when Bloomberg stated that they would be launching a $2.99 monthly subscription service for their Bloomberg BusinessWeek application.

Since Bloomberg signed on, a lot of eyes have been on Time Inc., to see what their next move in the digital world would be. According to the Wall Street Journal, the country’s largest magazine publisher has reached an epic deal with Apple.

Starting Monday, subscribers of Sports Illustrated, Time, and Fortune magazine will be able to access the iPad editions for free. The app will have an authentication process to determine if the user is a subscriber or not.

Time has still not reached a deal for selling digital subscriptions to the iPad editions of their magazines. Much like the TV networks’ disputes over TWC’s iPad app, it seems as though many major magazine publishers are having difficulties figuring out how to exist in the digital realm.

It’ll be interesting to see what the print media industry looks like in 5 years.