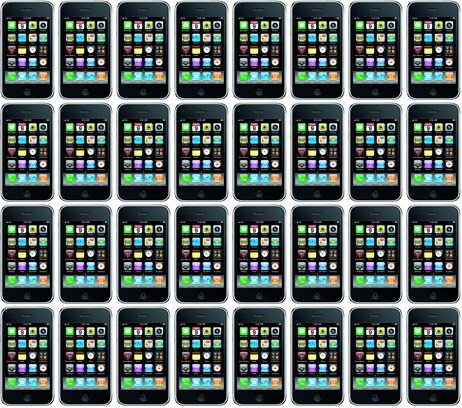 The iPhone is selling very well. That’s the message that was depicted loud and clear in Apple’s first quarter sales results for 2011. Among other very impressive numbers, the iPhone saw 115% growth in mobile market share, making Apple the largest growing manufacturer in the mobile industry.

The iPhone and iPad also accounted for 60% of Apple’s revenue in Q1 of this year.

“A new report released on Friday by market research firm IDC shows Apple’s iPhone had substantial growth in the first quarter of 2011.

Apple’s market growth in Q1 of this year places the company at the number 4 position on the list of the top 5 mobile vendors (right under LG and above ZTE). Nokia topped the list with 29.2% market share, and only saw .6% market growth.

The IDC report did note that, “The company posted the highest growth rate of the worldwide leaders… Apple’s results were buoyed by strong sales on Verizon Wireless and additional carrier deals.”

As far as revenue is concerned, the iPhone and iPad now account for 60% of Apple’s total income. Ole Begemann reports that, if it wasn’t for the iPhone and iPad, Apple’s revenue from Q2 2007 to Q2 2011 would have grown by only 119% instead of a staggering 466%.

Do you think that Apple is becoming a “mobile” company? Will the iPhone and iOS continue to slowly overtake the company’s focus and bottom line?