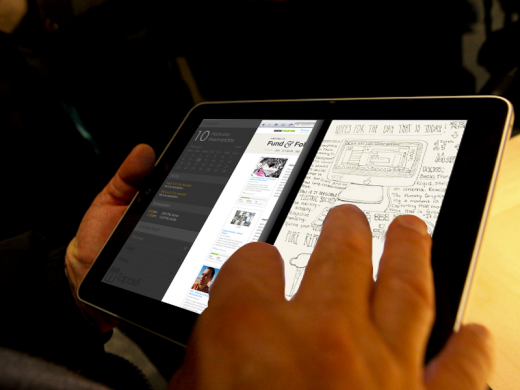 We’ve covered some cool products and innovations involving Apple’s tablet before, but this application could take the cake.

Does anyone remember that tablet concept from Microsoft that garnered so much attention last year? Well if you don’t, let me give you a quick refresher.

The dual-screened device, dubbed the Courier, was an extremely interesting take on a tablet device. Resembling a notebook, the Courier allowed you to use your fingers or a pen-like device for input.

Although the concept received a lot of positive feedback, the project was eventually shelved by Microsoft. Lead designer, J. Allard, reportedly left Microsoft in wake of the scrubbing of the tablet project. The reason for the Courier’s cancellation and Allard’s departure are unknown.

Well it looks like a couple of software engineers liked the Courier’s functionality so much that they didn’t want it to go to waste. They have been working on an upcoming iPad app called Tapose, and hope to capture the essence of the Microsoft concept in their software.

If they do it correctly, this would be one of the most unique applications to land on the iOS platform. They are promising Courier-like features such as integration with native apps like Mail and Safari. Imagine dragging a photo from Safari, directly to an email to send off.

Unlike other Kickstarter projects we’ve mentioned, these guys don’t need your help. They’ve already met their $10,000 goal. However, they are still taking donations, and any pledge of $10 or higher buys you a copy of Tapose when it gets released.