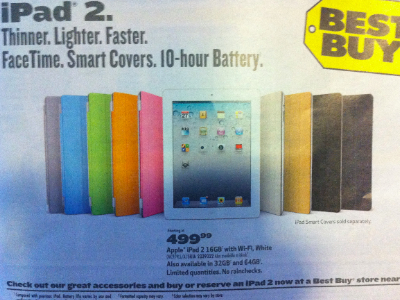 If you haven’t been able to snag an iPad 2 just yet, pay attention. It looks like the rumors we heard about Toys R’ Us becoming an iPad 2 retailer soon were spot on.

The Toys R’ Us website is spreading the word that the toy store chain now has iPad 2 stock at many of its retail stores. It appears to just be specific locations, not completely nationwide. I also couldn’t find a way to order online.

That wasn’t the only retail chain gossip that seems to have materialized. MacRumors is reporting that Best Buy featured its rumored iPad 2 promotion in today’s sales ads.

For those that don’t recall, Best Buy was accused of withholding stock for sales purposes, then later revealed that they were holding onto local iPad 2s for an upcoming promotion.

Like Toys R’ Us though, it seems Best Buy also has a limited amount of inventory. Engadget has gotten their hands on an employee bulletin that mentions the promotion :

“The iPad 2 will be featured on the front cover of the April 17 ad, and because of this, the reserve system will be turned back on” … “Corporate Support Teams know that many stores won’t be in the optimal situation to handle customers’ requests”

The document goes on to say that multiple stores are quoting a minimum of 3 units per model of the device, but that is only at select locations.

If this round of shipments is anything like the last, they are going to go quickly. It appears that if you have been looking to get an iPad 2, today would be a great day to do it.

Have you gotten your iPad 2 yet? What do you think of it?