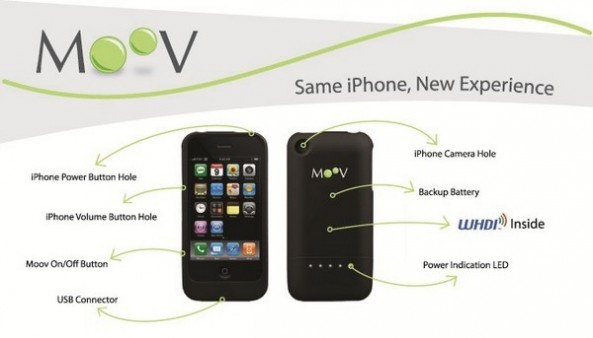 Mirroring has been all the rage since the iPad 2’s announcement back in March. It essentially allows you to display whatever’s on your iPad or iPhone directly onto your television.

The only problem with mirroring is that it goes back to the archaic (relatively speaking) days of using wires to output pictures and video from your iOS device, to your video display.

With recent technologies like AirPlay gaining steam, it was a bit disappointing to see Apple opt for a wired solution instead of a wireless solution.

One Israeli company is trying to capitalize on this need, and has created a case that allows you to wirelessly mirror the output from your iPhone to your television…

The company, OlionTechnology, has created the Moov — a case with a 3-hour-battery that is able to transmit everything from your iPhone’s screen sans wires using WHDI.

Although it looks a bit crude, and will definitely require some TLC from an aesthetics standpoint, you’ve got to be impressed with the speed of this thing.

The video shows Need for Speed being played, and there is no discernable lag between the iPhone and the television. Quite impressive if you ask me.

Currently there’s no word on whether or not this product will ever see the light of day. Would you be interested in a case like this?