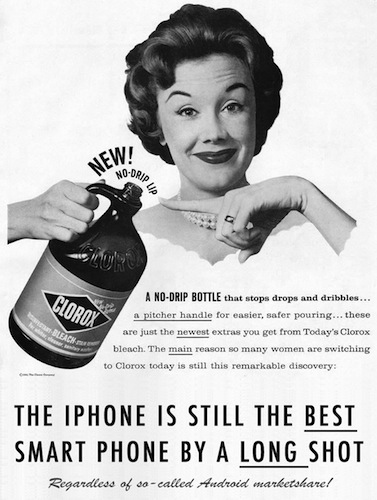 If this isn’t telling about the state of the smart phone industry, I don’t know what is. It’s particularly bad news for the folks at RIM — the company behind the BlackBerry brand.

Sensing that his employees were unsatisfied with their company issued BlackBerry smartphones, Clorox CIO Ralph Loura decided to give his employees a choice.

They could choose between three different smartphone brands: the iPhone, Android, or Windows Phone 7.

Guess which platform the smart folks at Clorox selected en-masse?

As you could probably discern from the graphic at the top of this post, the employees at Clorox were overwhelmingly in favor of the iPhone.

So much so, that 92 percent of employees decided to go with the iPhone, while the remaining 8 percent divided between Android, and Windows Phone 7. For what its worth, 6 percent decided on Android, while a paltry 2 percent went with Microsoft’s offering.

While true, this is just a small sampling of data from one corporation, it’s pretty eye opening to see such a ratio, especially in the midst of all of this “Android has more market share” talk.

I think Clorox employees are both clean, and smart.