Almost a full month after the announcement of the iPad 2, rumors about competitor offerings continue to swirl. Blackberry is making headlines with its PlayBook tablet because it will run applications built for Google’s popular Android OS.

Samsung was also trying to garner some attention from CTIA attendees last week by taking shots at Apple’s tablet. Remember the Samsung executives that sent TAB designers back to the drawing board after seeing Apple’s latest version of the iPad?

Well they were back, with a new and improved Galaxy Tab 10.1. So new in fact that Fritz Nelson of InformationWeek reports Samsung wouldn’t let them turn it on. This could be because it was a non working prototype.

The interesting thing is that Samsung was marketing the new Galaxy Tab 10.1 as being thinner than the iPad 2 at 8.6 mm thin. But this picture taken by InformationWeek seems to suggest otherwise. When Samsung was questioned about the photos depicting a slimmer iPad 2, the spokesman just repeated the public Galaxy 10.1 specifications. 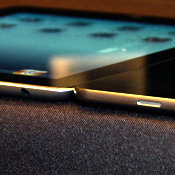 Finally there is the Motorola Xoom. It has garnered some attention from current Verizon subscribers, but outside of that sales are faint. The Xoom’s spec sheet and possibility of 4G are impressive, but the tablet is more expensive than the iPad 2 and it has almost no dedicated applications.

With an HP tablet, carrying Palm’s Web OS set to join the other suitable opponents, you could say that competition is heating up for the iPad 2. But as companies cram dual processors and high resolution cameras into their tablets, can they possibly achieve the success that Apple has seen? Doubtful. With lines still wrapped around the globe for their latest product, Apple is clearly still king of the tablets.

Does anyone think Apple has some good competition for their iPad 2? Tell us below!