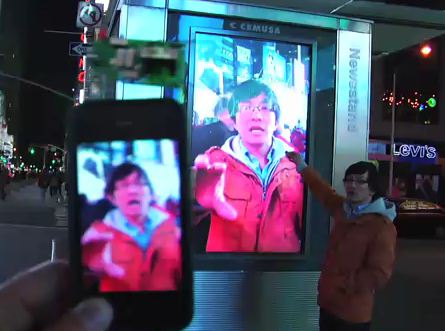 The iPhone has been known for many useful things, but hacking Times Square billboards is a first.

A video has been posted on YouTube showing a man who uses his iPhone to hijack video billboards in Times Square. CBS news has commented on the video, claiming that they would assume it’s fake, but if it’s in fact real, they’ll be the first to purchase one…

“First off I’m going to state that I do not know if this is in fact real or fake. My gut is telling me it has to be fake… but if it’s real, I’m so going to buy one!

Here’s some words from the hacker on how he did it:

The way it works is pretty simple: plug in my transmitter into the iphone 4 and play back any video clip. you can play it through the ipod feature or through the camera roll. the transmitter instantly sends the video signal to the video repeater and the video repeater overrides any video screen that it’s being held next to. it doesn’t matter what shape or size the hacked screen is because the hack video will simply keep its correct dimensions and the rest of the hacked space will stay black.

i chose times square for my demo because it has lots of video screens to try it on. it is also one of the most monitored and secured areas in new york city and that made it that much more fun :). you can see in my video that the repeater is pretty powerful but the signal is not very stable yet. i’m working on that. i will post a new video later this week explaining how i made this prototype.

Honestly, looks like complete BS to me. I highly doubt it was that easy to hack the billboards. Check out the video yourself below!