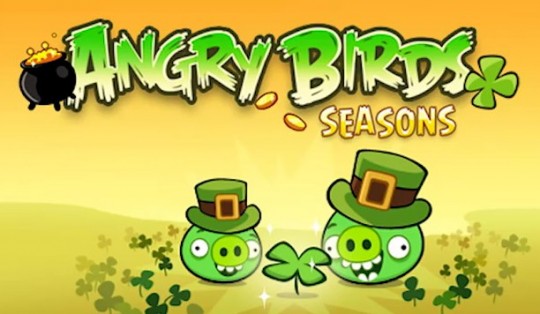 It’s no secret that we are Angry Birds fans here at iDB. But then again who isn’t? With millions of downloads across multiple platforms, this game will go down in history as the ultimate time waster. Well in case you’ve missed it, the latest iteration in Rovio’s smash hit series is here.

The lovable cast of pigs get a total leprechaun makeover in the newest version of Angry Birds Seasons. And with St. Patrick’s Day just around the corner, this application is the perfect way to get in the holiday spirit…

If you’ve played a previous version of Angry Birds, there’s no real surprises. Like all of their ‘Seasons’ updates, there’s no real change in the gameplay, just mostly in the backdrops and the pig’s outfits. You’ll also notice nice St. Patty’s Day touches throughout the menus.

Has anyone played this new version of Angry Birds Seasons? What did you think? Tell us below!