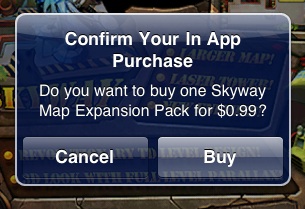 Apple’s iOS 4.3 has been making headlines for weeks. From iTunes Home Sharing to mobile hotspot, new features keep pouring out of Apple’s latest iOS update. With so many big changes, it’s easy for the smaller firmware tweaks to go unnoticed. One of those features, which I was glad to see added, is a required password reentry for in app purchases.

In previous versions of iOS, in app purchases did require a password, but with one major drawback. Apple gave users a 15 minute window after password authentication to make in app purchases. This window was to prevent a choppy App Store experience, especially for users purchasing multiple items. What was so wrong then, that they went and changed it?

There were several reports of outraged parents, whose children had “unintentionally” made in app purchases, due to no password being required. There were always parental control settings to restrict in app purchasing, but the negative publicity was enough to catch the attention of the U.S. Federal trade Commission.

They investigated consumer claims that some applications, aimed at children in particular, weren’t clear on in app purchases. Games like Smurf Village would make in game purchases, like $99 for a wagon of Smurfberries or $19 for a bucket of snow flakes, available to children without a password if they were in that 15 minute window.

Apple responded to the FTC’s concerns with promise to look over the in app purchasing process carefully. Well, whether they felt the concerns of the people were valid, or they just wanted the government off their back, the problem is fixed. All purchases now require a password, with no 15 minute hall pass.

Do you think the fault lies with Apple for the 15 minute window or the parents? Was it a good move to update the process? Tell us your thoughts on it below!