When Sebastien suggested that I try out this new voicemail app from Orange Vallee, I was definitely skeptical. I’ve tried 3rd party visual voicemail apps before on Blackberrys and Android alike, and have always been disappointed. I’ve yet to try any on the iPhone though, and this promised a few new tricks so I figured why not.

The download is free and available here. Where the other visual voicemail programs floundered, this one shined. The most dreaded part about setting these 3rd party voicemail services up is the activation process. ON Voicefeed, like most other services, requires you to setup an account. This is done by entering in a tiny bit of info and authorizing it with a code that is sent directly to your iPhone via text…

What I also liked about the setup process is that it automatically adds the ‘activate’ and ‘de-activate’ phone numbers to your contact lists, named and everything. I’ve actually lost activation numbers before and was left in voicemail limbo, not a good time.

ON Voicefeed definitely delivers on its promise. The customizable greetings are easy to use and I actually had fun making them for some of my closer friends and relatives. You have the option to record a greeting, use the standard greeting, or even input text and have it read to your caller in a variety of accents and languages. Groups can be made by dragging and dropping your contacts into the group files, it’s so simple! 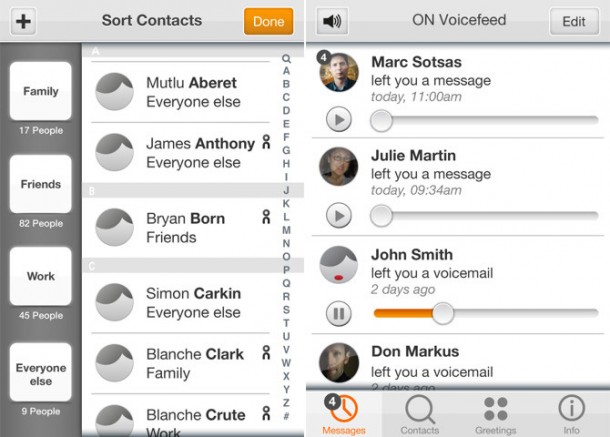 Now for the downfalls. The app malfunctioned more times than my native voicemail application by Apple, which is 0. The first error I got was that the app could not connect to server and it asked that I try again later. The second time it actually crashed my springboard. These errors only happened a few times, and I have been playing with it for most of the day, but that’s still a few times too many.

You shouldn’t ever have to worry about receiving your voicemails. Although I set up a lot of personalized greetings (did I mention how fun it was?), I didn’t receive many voicemails this afternoon to really put this app through the ringer. One voicemail I received had terrible quality, but that could have been due to the caller’s phone as well.

Are all the cool features in this app enough to make me drop my default visual voicemail for good? Probably not. But are they enough to keep me thoroughly entertained through the weekend? Definitely. Now, if only Apple would build some of these features into the stock voicemail app.

Has anyone tried this app out yet? Do you use any other 3rd party voicemails apps? Let us know below!