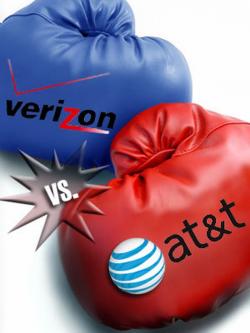 Verizon might win the coverage war, but AT&T takes the crown for the fastest data download speeds. That is, of course, according to Metrico Wireless. An independent mobile device performance evaluation company out of Maryland, Metrico has been advising companies on launch readiness of their wireless products and services for years.

According to their latest report, which includes thousands of field tests between 5 U.S. cities, AT&T clearly has the faster data. Metrico ran more than 10,000 web page downloads in Dallas, New York City, Seattle, Chicago, and Baltimore. They also ran more than 2,000 data download and upload tests, as well as over 4,000 voice calls…

The final results are astounding. Metrico Wireless states that the iPhone 4 on AT&T’s network downloaded data twice as fast, on average, as the iPhone on Verizon Wireless. This report certainly conflicts with earlier reports that claimed Verizon’s iPhone performed better overall than AT&T’s model.

Metrico claims that these studies were quick and based on a small number of test samples, in a single city. Metrico’s tests take in to account several variables, including difference in download speeds while in moving vehicles, and thousands of test samples. What’s more interesting is that the wireless evaluation company didn’t do the study for either carrier. A copy of the compiled data can be purchased by any wireless company for a mere $4,950.00

So the saga continues between the nation’s two leading carriers. Verizon might have the better voice quality, but to an always connected guy like myself, data speed is much more important. In fact that’s one of the reasons I’ve held off from switching to Big Red thus far. Throw in a 4G LTE chipset and then maybe we can talk ;). What do you guys think of your Verizon iPhone’s data speeds, is it lacking? Has anyone tested these two models for themselves?