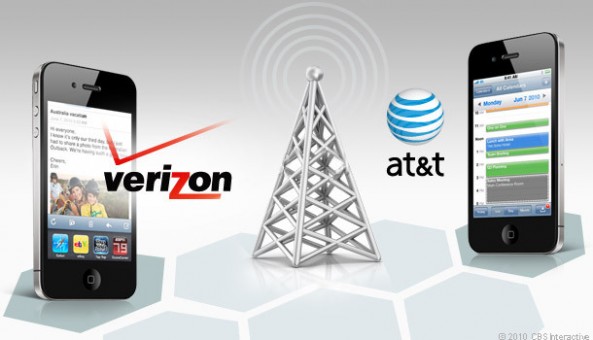 Now that Verizon carries the iPhone 4 on its CDMA network, there is a new way to compare iPhone data speeds with AT&T’s infrastructure.

People have been comparing the Verizon and AT&T iPhone’s data speeds, and CNET has posted a very detailed comparison of how the two networks compete with each other on the iPhone. The results weren’t that surprising; Verizon seemed to do better than AT&T in almost every way…

CNET ran four tests in four different locations in San Francisco to get a good idea of network reliability.

First, they checked the number of bars that appeared in the network signal meter. While it has been proven that the signal bars are arbitrary and not really indicative of network strength, it’s interesting to notice that Verizon had consistently better coverage through these signal meters in each location.

CNET also tested photo uploads to Facebook, and how fast a web page was rendered in mobile Safari. Out of all the tests in each location, the Verizon iPhone won (sometimes by more than 20 seconds) 83% of the time. AT&T only gave superior readouts two out of 12 times.

“However, before you fly Big Red’s banner, keep in mind that these results are indicative of our particular experience. Results in your area may differ, and they may also change over time. Although AT&T’s HSPA 3G network is technically faster than Verizon’s EV-DO, the results don’t always align. Coverage depends heavily on your exact location and even the time of day.”

I live in the midwest, and I hardly ever hear about people I know having problems with AT&T. Keep in mind that these CNET tests were performed in San Francisco, which is a very heavily iPhone-saturated area for AT&T.

If you’ve had the experience of using Verizon and AT&T’s network in your area, which one seems better to you? Is Verizon’s network compelling enough for you to switch carriers from AT&T when you get the chance?