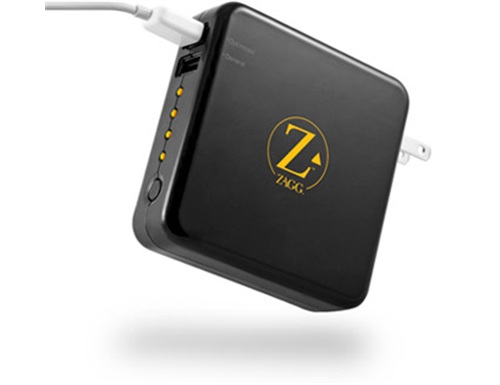 As a frequent traveler and an iPhone addict, I always worry to run out of batteries in an airport or worse, in the middle of a flight. I’ve tried various options for making sure I would never run out of juice but I never found the right accessory that would fulfill my needs: convenience, ease of use, light weight.

That was until the peeps at Zagg sent me a review copy of their ZAGGsparq, a 2-in-1, or maybe I should say a 3-in-1 accessory for iPhone, iPad, iPod Touch, and virtually any smartphone out there, but we’ll obviously focus on the iPhone part…

Plug it into a wall and the ZAGGsparq will allow you to charge 2 devices at the same time. Very convenient if like me you own several iPhones and iPads. While you still need 2 USB cables, you don’t have to plug your devices in multiple outlets.

On the first day, I plugged the Sparq into a wall and charged my iPhone and iPad simultaneously. Nothing amazing here. The Sparq charged my iPhone in a couple hours and it took several more for the iPad, just like you would expect. When the iPad was charged, I unplugged the Sparq and checked the yellow lights that indicate power level. All 4 lights were on, so I knew the Sparq was fully charged, ready to provide extra power for my devices if needed.

On day 2 and 3, I totally forgot about the Sparq and charged my iPhone using my iMac. The Sparq sat there, unused.

On day 4, I remembered about the Sparq and since I was at 1% of battery left on my iPhone 4, I thought it was the right time to put this portable battery charger to the test. I plugged my iPhone via the USB cable to the Sparq and after 10-15 minutes I decided to have a look at the yellow lights on the Sparq. To my surprise, 2 of them were already gone, meaning that half the power held in the Sparq was gone.

A couple hours later, my iPhone was fully charged. I checked the indicator lights again. 2 of them were still on, which meant I still had 50% of power left in the Sparq. That’s when I realized I shouldn’t rely on these lights to figure out how much power is left because they obviously didn’t work properly. No big deal.

On day 5, my iPhone was back under the 10% of battery so I once again plugged it in the Sparq. Two hours later, the phone was fully charged and there was now only 1 light on, meaning the Sparq had another 25% of its capacity left, but again, I didn’t rely too much on that.

On day 6, my iPhone was at about 40% of battery left. I decided to charge it using what was left in the Sparq. I plugged it in, and 15 minutes later, the last indicator light disappeared, technically meaning the Sparq was out of juice. But it didn’t stop it from charging my iPhone. The Sparq finally ran out of power a few minutes later, but my iPhone was already 96% charged.

Five days went by from the day I first charged the Sparq to the day it completely ran out of power. During that time, I was able to charge my iPhone 2.5 times. While this is under the 4 charges that Zagg claims the Sparq can hold, I was still very impressed. The Sparq sat for 2 days before I started using it as a portable charger so I believe its battery depleted a bit during that time, and I’m pretty confident I could have had 3 full charges if I had used it right away.

The ZAGGsparq is the winner of 2 CES Innovations Awards and now I know why. This is by far the best portable battery charger I have seen and I absolutely recommend it.

The only downside I could find to the Sparq is its price. At $99.99, it is definitely not a cheap accessory, but you get what you pay for: a great portable charger that will give you a least 2 extra charges while on the road. This is priceless to power users like me.

You can buy the ZAAGsparq from here. Enter the coupon code “zagg20” to get 20% off, compliments of iDB.