New details have surfaced about AT&T’s upcoming changes to their voice plans, including detailed eligibility requirements.

In a report yesterday, we informed you about the new ‘Mobile to Any Mobile’ plan that AT&T has rolled out this morning. 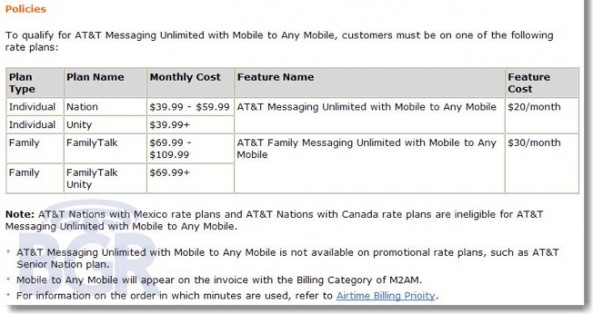 Of course all participants will need to be on unlimited messaging plans in order to qualify. Those run at either $20 or $30 for the individual or family plans, respectively.

I personally switched to this new plan just a few minutes ago. I stand to save about $15 dollars per month with the addition, so it’s not much, but I’ll take it.

Here you can see that the removal of one feature, and the addition of the other essentially cancel one another out. I was able to save money by lowering my rate plan due to the fact that most of my calls are to mobile phones.

Because of this change I won’t require nearly as many minutes as I needed before hand (I hope).

My new voice plan is about $16 cheaper than my old rate plan, so again I’m saving about that much each month because of this change.

This is just the latest in a bizarre and rare outpouring of love from a mobile company who normally doesn’t give a rat’s behind about their customers.

It’s obvious that AT&T is greatly concerned about the impact that Verizon’s acquisition of the iPhone may cause to their bottom line.